Hi,
I have noticed the upcoming events to stop working after some time. Today is Dec 11 and looking at the snips from screenshots attached, it only shows past events. Different browsers, logging out/in won’t help… As the so-called-support has not answered me at all, maybe someone here knows something? Help please? 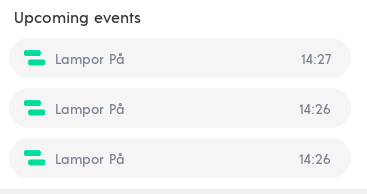 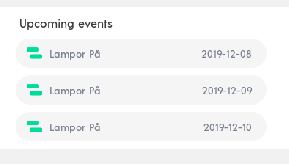 Thanks! That was it, worked out nicely.

I suspect doing a hard reset of the Heart was the cause of the problem in my case.
Did you also do a hard reset?

Yes, but not recently. That was some weeks ago…

This is still an issue.
I’ve tried twice in two weeks to “re-save” the place- and time-configuration, an each time I do that it looks correct in the browser at the moment but today (17th) it’s still messed up with historical events/dates.
There should be other events later this afternoon than these.

I can confirm that the problem keeps returning still with my Heart.

Possibly a new variant after latest upgrade;
I have two automation’s for lights off, one for weekdays and another for weekends. Today (Monday 23) both is set as upcoming events tonight. The weekend one should only trigger Sat & Sun. Anyone to explain or confirm as bug? Thanks.

My upcoming events list is weird now with the latest version…

There’s more 3 entries visible (yay!), BUT all the dates (visible when I click on the times) are christmas eve or christmas day. Anyone else having this behavior with the upcoming events list being stuck in the past?

Doesn’t matter if I reload the web page (I don’t have the upcoming events list in the Android app, which is another bug).

Yes, that behavior is known unfortunately. As a workaround it helps temporarily to re-save your time settings (found in general settings). You may also have noticed that the time reported by the heart is way off when this happens. Everything works though.

My Heart is showing the correct date/time though, so it’s likely the same bug but it can manifest due to multiple reasons…

I just found something new, upcoming events also show up when not activated for that day.
In this example my wake-up automation is not meant to be triggered at weekends: 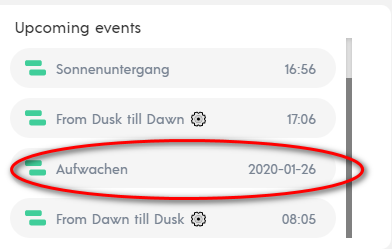 Fortunately, it didn’t run this morning.

I have also seen this! Can you confirm it is still present after re-saving the ntp info? (workaround I use to correct the malfunctioning time shown most of the time)
I saw this some time ago but with everything else going on, I just thought it was in order and should run whether or not there was something in them that would trigger… I probably did not have the best of luck thinking that one…

Can you confirm it is still present after re-saving the ntp info?

Great job! Another one for the support I guess… Will never be a new release if we keep them coming at this rate… But maybe a good one in the end?

But maybe a good one in the end?

I’m sure it will be!

Not that there ever were any doubts, but here is another example of the same issue;
(funny enough same thing as well) To be clear: tomorrow is Sunday. 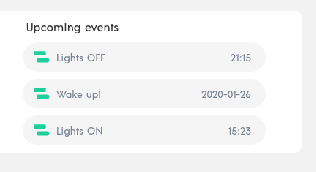 And I thought being awakened at 05:45 is pitiful enough…

The upcoming events will ignore the “Conditions” set in the AND section, that’s why you can see that some event’s are scheduled but nothing is executed at the point. This has to do with the scheduler, it has scheduled something to happen daily which will force the service to run but when it checks if the conditions are met in the AND and find it false then it will not execute the actions.

To understand it easier think of having a condition in AND that is like this:

So the upcoming event will say that an automation will be triggered but we don’t know if all the condtions have been met so executing the actions is not certain until time of execution. Of course the automation engine could be smarter and figure this out for conditions with Weekdays but that would require some work, and would be an improvement request for later.

Thanks for the explanation. Then my guess above were actually spot on.

But… I take it this is not the intended behavior? As space is scarce, it would make sense to use it for things that will actually trigger something, or is there an other point to this?